Total Views |
By Nitin M Deshpande
E-mail: [email protected]
Commencement of flight to Rupsi on 8th May 2021 has put Western Assam back on the flight map after a gap of almost four decades. Thanks to RCS- Regional Connectivity Scheme, which planned to add 100 more underserved or unserved airports back into action so that balanced growth can be achieved across the states & in all parts of the country.

There are around 400 airports/airstrips in India, and around 75 of these had a scheduled operation in the year 2016. Most of these unserved airstrips came into existence as a result of World war II. They were defunct for many decades as aviation was much a regulated field post nationalization of airlines in 1953. There was an attempt to provide air connectivity in the late '80s when Vayudoot – a public sector airline, was launched with much fanfare but got folded in few years, making many airstrips going off the map again. Post liberalization in 1991 till date Indian aviation has seen many ups & down and most of the reports suggested that aviation will be the fastest-growing sector in India. Covid had made a significant dent into all projections. Pax traffic in the domestic sector has reduced by more than 50% in the last year. Thus, UDAN (Ude Desh Ka Aam Nargik), as envisaged in the New Civil Aviation Policy of 2016, requires a mid-term review.

What was the vision of UDAN- To provide affordable and convenient air travel for a middle-class citizen of the country wherein a person can travel a distance of 500-600KM in one hour @ Rs 2500/- indexed to inflation. In 2014-15 number of domestic air tickets sale was nearly seven crores.  To enable this volume to reach 30 crores by 2022 and 50 crores by 2027, the RCS- Regional Connectivity Scheme was made part of the new policy document to enhance regional connectivity through fiscal support and infrastructure development. It is to implemented by

Total routes commenced so far via route bidding process stands to nearly 299 by the end of 2020. This was possible as Govt has budgeted around Rs 1000Cr in a phased manner to develop a no-frill airport at an indicative cost of Rs 50 Cr to Rs 100Cr without insisting on financial viability.

Viability of airport can be assessed on the basis of aircraft movement, passenger traffic and freight movement. However, as regards UDAN, passenger traffic will weigh far more than other parameters as the scheme's design was to make ordinary citizen fly.

Chart B provides the snapshot of domestic air traffic across various country regions, including all metro and Tire II cities and RCS airport. 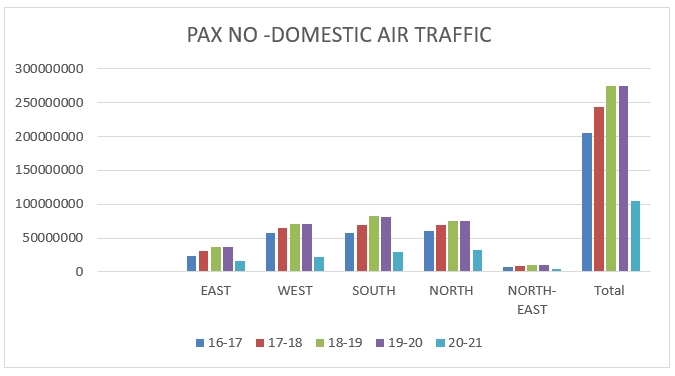 The challenges before the policymakers in light of Covid impact are many folds, and the total domestic traffic in FY20-21 is half of what it was five years earlier or has shown negative growth of around 61% over earlier year. The aviation industry is passing through the worst crisis, and the pandemic has disrupted the air transport industry as never before. Airlines across the globe are facing an unprecedented uphill task to keep it in the air, and Indian carriers are no exception. It may take 3-4 years before air traffic restores to what it was three years before, and a target of 500 Million pax is not likely to be achieved until the year 2030. It means there will be added pressure on the RCS scheme to run it, and many airlines will withdraw from small airport operation as it makes no economic sense. But should we abandon the UDAN or tweak it? Is UDAN necessary at all? How do subsidiaries work in the future financial world, and how will VGF (Viability Gap Funding) shape out? Is UDAN unique to our country, or are there any parallels? How can RCS airport be made profitable?

Communities worldwide need to be connected to the national network, and many governments recognize this. Some may adopt a state-run program or offer concessions to an operator to provide such services to such far-flung or not easily accessible area. What is called ESP (Essential Services Program) in the USA is similar to RCS and offers air connectivity for the people in Alaska or Hawaii, or many other destinations.

Suggestions to ponder upon:

To develop existing 100 airports/airstrips at a minimum cost of Rs 50 Cr means a total spend of around Rs 5000 Cr over a decade. As such investment will be spread over length & breadth of the country & with airlines withdrawing due to capacity load or other reasons, such investment may not meet its objective. Thus, aim shall be to invest where it makes it a successful airport if not profitable as regard to meeting its objective.

We will require a CAGR of 25% to reach the target of 30Cr domestic pax in a 5-year time. Major airport operators worldwide have reported losses, including those who operate in India and are requesting concessions or assistance to tide over the pandemic crisis. It will be a massive challenge for all the players in aviation as well as Govt too and thus UDAN policy review becomes more critical.

About the Author- Nitin M Deshpande is an aviation professional with over 30 years of experience and has worked with various companies like Hindustan Aeronautics Ltd, Pawan Hans Helicopter Ltd, Airbus, Air Works India, Kirloskar group and Adani group.

Disclaimer: The views and opinions expressed in this article are those of the authors and do not necessarily reflect the official policy or position of PARC.